One of the first things that first responders do when they start to treat a trauma victim is to find out where the victim is bleeding. Second, they determine which of those injuries is most life threatening.

At first, it may be difficult to identify the source of the bleeding. Head wounds tend to bleed a lot, but a nick to the forehead isn’t life threatening.  Internal bleeding, though, could be.  First responders are trained to look for not only the most visible wounds, but also those that can do the most harm to the patient.  Those assessments can mean the difference between life and death.

While not literally a life or death situation, finding where a business is “bleeding” revenue and profits can be just as important when determining if a business will survive.  Too often, we focus on the most obvious source of revenue leakage (typically large, high-volume customers) and then rationalize why it doesn’t make sense to increase prices for those customers. When was the last time you heard, “We can’t afford to lose our largest sources of revenue!”? Yet, at the same time, we ignore the less-obvious bleeding that can ultimately result in a life-threatening scenario.

How to determine where to stop the bleeding

One of the simplest ways to understand where your business is hemorrhaging revenue and profits is to plot your price per unit against volume by customer.  When you’re done, it’ll look like the plot below from our Pricing with Confidence. 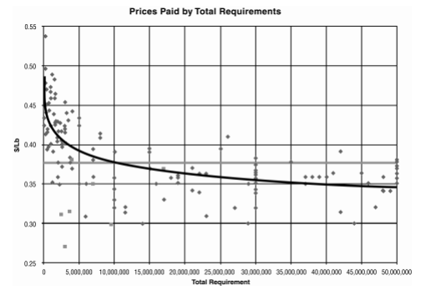 The graph shows the price charged per pound for a commodity product along with the total requirements (volume) for each customer.  You’ll see the intended base price is $0.38 per pound.  Now, look to the right-most portion of the graph.  You’ll also see that the largest customers pay a little less than the base price – likely because they are receiving a volume discount.  At first inspection (before looking at this plot), a pricing leader might be inclined to raise the price with these largest customers.  That’s your bleeding head wound.  The discounting here is likely very obvious, but often times intentional.  Your business has chosen to offer a slight discount (around $.02-$.03 per pound in this example) in exchange for a large volume commitment or the marketing advantages that result from working with an industry leader.  For instance, if you sell salt, it’s likely to your advantage to advertise to the market that McDonald’s has chosen you as their primary salt provider.

In most cases, small- and medium-sized customer pricing doesn’t get the same attention as that of your largest customers.  Those customers aren’t part of the account reviews with your CEO.  They aren’t highlighted in annual review slides and they aren’t managed by your top account managers.  Yet collectively, they represent similar, if not greater, price and revenue erosion as your large accounts.  And, they are much easier to control.  Once you’ve identified these small- and medium-sized outliers, your next step is to understand why these customers are receiving discounted pricing.

Because these accounts receive less visibility from your leadership team, it’s less likely these accounts’ discounts were an intentional move by your organization.  Instead, they may be the result of a salesperson looking to close a deal at the end of the quarter or perhaps based on the promise of higher volumes that never materialized.  In any case, they are indications of poor control over your pricing.

After reviewing your customers holistically, segment them by salesperson.  You may find systemic discounting by sales region or you may find a random pattern.  If it’s the former, this is an opportunity to educate the regional leader on your discounting policies.  If it’s the latter, this is an opportunity to review how your salespeople are compensated and incented.  It’s likely you’ll find a conflict of interest between how they’re measured (revenue) and how you’re measured (profit or price realization).  If nothing else, it will become clear where you need to install or reinforce pricing policy.

Like a great first responder, it’s time for some triage.  By understanding where your patient (business) is bleeding, you can then identify which of these wounds is life threatening – even if they may not be obvious on the surface.  From there, you can swiftly take action to save the patient (and your business).

Interested in other ways to plot your data and assess the health of your pricing strategy? Check out our info-graphic showing (4) key analytics to jump start pricing gains.