Each year, Holden Advisors hosts an Executive Customer Forum to discuss the most pressing topics facing commercial organizations. This year, I had the honor of facilitating a discussion on how to build organizational commitment as it relates to commercial transformation - the central theme for the meeting. Specifically, we discussed the mindset required for leaders to effectively propagate their visions across their organizations. The following is a recap of the presentation and, at the end, we discuss three key findings from the executive discussion.

Interestingly, as the conversation began, participants shared their frustrations and commented on how, at times, leaders just need to tell people what to do. While that may work in tactical situations like “turn here!” when driving a car, more often than not, that kind of command turns off people’s natural motivation to be innovative. In my 28-year career as an Air Force officer, I've never once used the phrase, “And that’s an order!” because, in the long run, it doesn’t work (despite what you might have seen on television). One of our participants pointed out that great leaders earn the respect of their teams. As a result, following the leader without being told becomes about respect for the mission, not duty.

Not only that, but handing down orders squashes creativity, especially with higher-order problem-solving. When the members of a team are not allowed to use their own expertise and skills to solve problems, leaders run the risk of missing out on better ideas. Let’s face it, leaders don’t have all the answers and all of the executives in the room agreed with that sentiment. That’s one of the attributes that makes them such great leaders in the first place! Instead of acting as all-knowing leaders, they know how important it is to motivate employees to solve problems without micro-managing them. 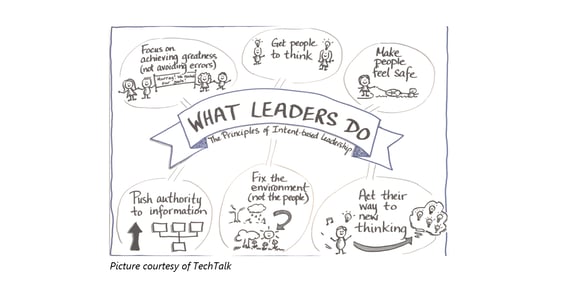 This is where “Leader’s Intent" comes into play. David Marquet, former Captain of the Santa Fe submarine and author of Turn the Ship Around! wrote about leadership in a way that built upon the concept of Leader’s Intent. Marquet had been asked to lead one of the lowest-performing submarines in the Navy - one in which the crew was trained to specifically follow orders while he was trained to captain a different type of submarine altogether. He knew it was a recipe for disaster. So, instead of mandating actions to his new crew, he did the opposite. He started to ask his crew for their opinions and to take responsibility for certain areas of the mission, empowering them to make decisions (except for a critical few that he kept for himself) and take ownership of their collective vision. The result: that submarine went from the worst to the Navy’s very best. And, as the participants of our Executive Forum quickly realized, giving your crew a stake in problem-solving works just as well in business as it does in the Navy.

After Leader’s Intent, we focused on the idea of addressing employee’s fears before getting them to buy-in to significant change. Said another way, if employees are concerned about losing their job due to organizational change, they’re less likely to support it.

But employees fear all sorts of things. Salespeople, the group decided, often fear “looking dumb” in front of the client. You can only say, “Good question, I’ll find out,” so many times before the client thinks you don’t know what you’re talking about. We’ve seen this countless times when a salesperson tries to present a complicated ROI calculator to a client. Once the client starts poking holes in the calculator’s logic, the salesperson packs up the tool and doesn’t show it to anyone ever again.

In terms of internal operations, we talked about how those employees were most fearful of having the parameters of their job change. It’s not uncommon to have highly-tenured employees in an operations group who have been performing the same function for 20-30 years. For them especially, change is scary.

So how do we help employees get over their fears? The executives at the forum came up with three guiding principles:

Holden Advisors’ Executive Forum reminded me what can be accomplished when you gather a group of smart, motivated people—even when trying to solve for a complex topic like commercial transformation. You don’t need to pull in leaders from around the country, though, to have this sort of conversation. By utilizing your employees’ creativity and problem-solving abilities and by helping them overcome their fears about change, your team can help you drive the positive change you seek.